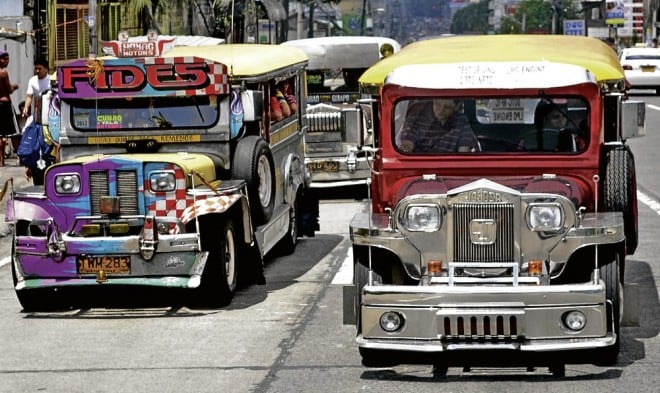 Under the Paris Agreement , the Philippines should reduce emissions by 70 % by 2030. Modernization of the jeepney is necessary as they allegedly contribute 15% of the transport emission in Metro Manila or about 3% of the country’s total GHG emission . The embedded emissions of buses, cars, vans, trucks and motorbikes were not included in the calculations. Air pollution in densely populated cities like Metro Manila costs billions of pesos yearly. Also, there are about 12.25 million vehicles in the country and there are only 300,000 jeepneys But putting all the blames of pollution to the iconic jeepney as well as the traffic jam is too much to bear and too unfair for the lowly jeepneys.

The iconic Jeepneys are the products of creativity and resourcefulness of the hardworking mechanics after WWII .The iconic jeepney symbolizes culture, Filipino ingenuity, and adjustment after suffering extreme adversity brought about by WWII that caused deaths of more than half million Filipinos. Left over US military jeeps were transformed into (jitney) jeepney to cater to the transport needs of people to speed up “kalesa” and human pedaled tricycle including and the rural carabao pulled gareta or kariton.

This paper summarizes of What The Public Should Know About the Government’s Jeepney “Modernization” . We maintain that the phase-out of old, un-consolidated traditional jeepneys is detrimental , untimely, and unnecessary.

Firstly, we support PUV modernization, in general and the jeepney modernization in particular as it is a laudable program of the government that “ public transportation must adequate, safe, and comfortable, travel time is predictable , clean and environment friendly. PUV drivers are disciplined, competent, and mindful of the common good . ”

Everybody including the jeepney drivers/ operators are very supportive. However, there are features stipulated in the DOTR Dept. Order No. 2017-11, commonly known as the Omnibus Guidelines that must be addressed and the public should know about them.

1. Fleet Management Scheme for the modern jeepneys. This central feature of jeepney modernization program implementation has the following interrelated features:

a. Jeepney driver/operator should form cooperative which will consolidate the operations and management of the fleet (i.e mechanical engineering side – preventive maintenance, check-up and repairs, financial – loan payment, etc.). It is not that easy and quick to convince and organice into COOP 300,000 to 400,000 jeepney drivers/operators in 3 years and compliant to the Cooperative Development Authority accreditation process.

b. Jeepney operators should surrender their franchise and old jeepney for consolidation . This is like surrendering their lifeline as the jeepney is their main source of livelihood and income.

c. Route rationalization which is yet to be initiated by LGUs . (LGUs will not do it up to 2022 due to election fever ). But the drivers/operator disliked this plan as they are not being consulted and many will lose their routes leading to considerable lost of income.

d. Related to care and management under fleet management scheme is the required “lay-over garage” with sufficient space and additional 30% space for the total number of PUV. Lucky for those early COOPs who had purchase lands before, but the late comers find extreme difficulties in locating site for layover garage plus the huge costs of the lands and the building.

e. The training required for COOP formation, and how to be accredited by the Cooperative Development Authority (COA). Add the training/ seminars required among drivers through the Driver’s Academy. Huge amount is needed to train or re-train the drivers (300 to 400 thousands of them) . Who will shoulder the huge costs? It is not stipulated in the DO 2017-11.

With all these features of Modern Jeepneys, they become costly/expensive to be operated and managed. When the Euro4 injection pump malfunction, replacement is so expensive (@ PhP150,000 ?) and time consuming as they are imported . The aircon has no separate engine like the big buses, hence , they easily malfunction as the door is opened frequently. How much is the wifi subscription? (For 20MBfs ,its already PhP1,600—PhP1900/month).

Euro 4 engines are untrusted or not durable ? Should this be the explanation why in Europe, they quickly manufacture Euro5, and Euro6 engines. What is claimed is that these later engines (Euro5, 6) are “cleaner.” Is it also correct to ask “Euro4 engines, have no longevity test under different situations ?. They are not “battled tested” as they say. Are we made again as dumping ground of their unmarketable Euro4 engines under European conditions ? And “ the government is prescribing Euro 4 engines, Why ?”

3. The financing aspect on how the capital scarce small jeepney drivers/ operators acquire the Modern Jeepneys (MJ) is the biggest set back. The government promised to shoulder the equity requirement of P80,000 ( 5%. ,2017 price of modern jeepney was only P1.4-1.6M per unit). There was price escalation of MJ. They now (2020) costs P2.5 to P2.6 million per unit. The subsidy was increased to P160,000. The implementing Rules and Regulation (IRR) is yet to be formulated.

For the 95% balance to complete the payment of the Modern jeepneys ( MJ) before they will be acquired by the COOP, the 2 GOCC banks (DBP & LBP) will shoulder it. DBP designed a PASADA project while LBP had SPEED project. Their combined credit window is P3.0 billion as they allotted P1.5 Billion each but this credit allotment could buy only 1,200 units. In Metro Manila alone, there are 73,000 traditional jeepneys and about 300,000 units for the entire country.

This leads us to the loans disbursement considering banking guidelines. The 300,000 modern jeepneys will costs about P0.75 trillion. DBP and LBP combined cannot fully finance through their loan program the whole jeepney modernization. First, they are funding equally important development projects for the country. Second, even if they have sufficient money, they could NOT simply give loans to COOPs that do not have a) track record in managing huge loans and b) no collateral.

4. Repayment of loans depends on a) base price of jeepney per unit, b) the interest rate and c) payment duration We computed the total costs (fixed costs and variable costs) per year and translated to per day basis. At jeepney price of P2.5 million per unit, the earnings per day should be about P6,899. To earn this amount, jeepney fare should increase 2 to 3 times ( P23 to P34 for 300 and 250 jeepney total rides per day, respectively).

That there will be no jeepney fare increase hides the truth. High quality or safe, comfortable and clean jeepney has corresponding price to be paid. Making the riding public believe that there is no fare hike is a lie.

5. DOTR take a blind stand on fare hike due to its domino effects. Fare hike means high cost of living as it will translate to higher transport costs of food (goods) from the farmer or site of production to consuming centers. High fare will also mean higher transport costs per family. Daily wage earners will demand higher wages . Increase wages/ salaries shall negatively affect business profitability and it will lead to instability.

5. PUV modernization requires time to implement. Claiming it was started in 2017 needs updating as it started much earlier. Scheduled to be fully implemented at year 2020 could not be met even with or without pandemic or even if all the drivers association will agree. The main constraint, is the low assembly of modern jeepney at 1,000 units or more per year. In 3 years, it would require the assembly of 24,300 units per year to replace the 73,000 traditional jeepney in Metro Manila alone. In turn, the low assembly/manufacture could be attributed to low take out/delivery of finished units which is due to in adequate financing. Private investors including the assemblers/ manufacturer know how to compute. They support the jeepney modernization because they know its huge business opportunity. But they are on a “wait and see” attitude. Hence, the low modern jeepney assembly.

1) Allow the overhaul or remanufacture of engines that will reduce considerably their emissions and pass the emission standard. The 15 years and above age of engines must NOT be imposed if the level of emission required is adequately met after overhauling or engine re-manufacture.
Privately owned emission tests apparatus must be calibrated with the reference machines, stamped, and be regularly monitored/ evaluated.

3) Relax the engine type prescription (Euro 4) provided the emission requirement or standard is met (as per Clean Air Act). This section of the Omnibus Bus Guideline that stipulate Euro4 engines should not be made mandatory as freedom of choice of the citizenry is obliterated if not deprived. This is unconstitutional.

3) Local assemblers who can fabricate safe , comfortable and low gas emitting jeepneys must be encouraged rather than limiting it foreign companies and few local assembler/fabricator as long as they are accredited by following the PNS for jeepney and emission standard as per Clean Air Act.

The fabrication of many parts locally must be allowed or encouraged . In the short-to-medium term, we should locally produce rubber tires. We are growing rubber plant but we do not have rubber tire factory. We export the latex and in turn , we import all our rubber tires; and vehicle parts that do not involve “rocket science,” should be produced/ manufactured here.

For the medium to long term , while our suggested time table is on the 11th year and above, it could be started anytime now. Our claim is “No country in the world has fully modernized their vehicles through importation.” This is the major blind side of PUV modernization which include the jeepneys. This should be addressed through “Homegrown modernization”, to generate more employment so necessary with our increasing member of labor force, avoid dollar outflow when we import, increases the value of our products (rubber) generating higher income for our farmers growing rubber and higher income for local vehicle parts provider. Import dependent modernization will drain the economy, more so, it is unaffordable to many, makes the poor poorer, the rich richer and so on. We would like to see modernization that will unleash further Filipino creativity and innovativeness while preserving our cultural identity.

Homegrown PUV modernization should be viewed as a component feature of our overall sustainable and inclusive economic development framework.

* This paper is the executive brief from our study ADDRESSING THE “BLIND SIDE” OF THE GOVERNMENTS PUV “MODERNIZATION” PROGRAM: THE CASE OF JEEPNEYS where TEODORO C. MENDOZA is Lead researcher/ writer as the Science Director of Community Legal Help & Policy Center , G/F KGM (Lemanz) Bldg. Km.21 Aguinaldo Highway, Bayan Luma VII Imus City 4103, Cavite, Philippines . For the complete copy of the paper , send email to :[email protected]