Thousands in Masbate get food relief packs from mining firm 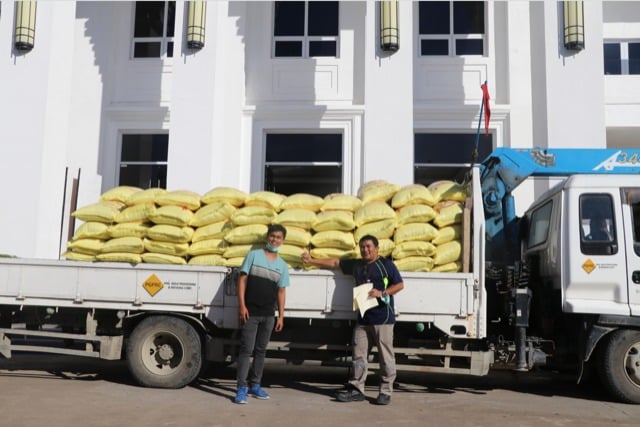 Thousands of homes, specifically 21,329 families, in Masbate province and in Aroroy town, have received relief packs from the Phil. Gold Refining & Processing Corp. (PGPRC), which had earlier earmarked P16.8 million to support the anti-COVID19 efforts of the province and the municipality which hosts PGPRC’s mining site.

The firm also turned over an ambulance unit to the Masbate Provincial Health Office through the Office of the Governor, and another unit is set to be delivered in the next few weeks.

PGPRC owns and operates the processing plant of the Masbate Gold Project located in the municipality of Aroroy, which has stimulated the local economies and has created jobs for people in Masbate, particularly in Aroroy.

PGPRC president Dan Moore said that in the context of the “worldwide health and economic crisis that we are experiencing, we all have to do our part in working together to protect and provide not only for ourselves and our families but also for the community as a whole.”

Since March 15, the gold firm has been working with Masbate Governor Antonio Kho, Aroroy Mayor Art Virtucio, and local line agencies to provide Aroroy’s rural health unit quarantine tents with health amenities, gallons of rubbing alcohol, N95 masks, and food packs. Some 500 sacks of rice were donated to the provincial government for distribution to marginalized constituents in other municipalities.

In April, PGPRC and the municipal government of Aroroy distributed food packs for the eight impact barangays and 33 neighboring barangays. This effort covered rice subsidies of all of Aroroy’s 41 barangays. PGPRC has sustained its continuing support programs, such as providing meals to the enforcement frontliners of Aroroy who man the check points and quarantine areas.

Aside from the the funds sourced from PGPRC’s SDMP funds, the firm also donated five million pesos to the Provincial Disaster Risk Reduction Management Office (PDRRMO).

He cited the provincial and municipal governments for providing these services, saying:

“It is good that the government is providing all these services and relief to the community; so we in the private sector, as well as private individuals, should take on the challenge and do our share to make sure the communities and their people around us stay afloat.”

PGPRC is a wholly-owned firm by Vancouver-based B2 Gold Corporation, a 13-year old low cost, international senior gold producer, which has operations in Mali and Namibia and numerous exploration and development projects in various countries like Colombia, Burkina Faso, and the Philppines.

Recently, PGPRC was cited by the Department of Finance as one of the top 20 of the corporations who paid their income tax ahead of the deferred payment deadline. “This was meant to help the government sustain in its current efforts against coronavirus, and to bolster its economic recovery programs,” Company officials said.

Ria Atayde on claim that Arjo was ‘friendzoned’ by Maine Mendoza: ‘Hala, epal’

‘Bato’ to ABS-CBN workers in danger of going unemployed: Just find other jobs