‘BuyAnihan Palengke’ launched in Caloocan for livelihood of the needy 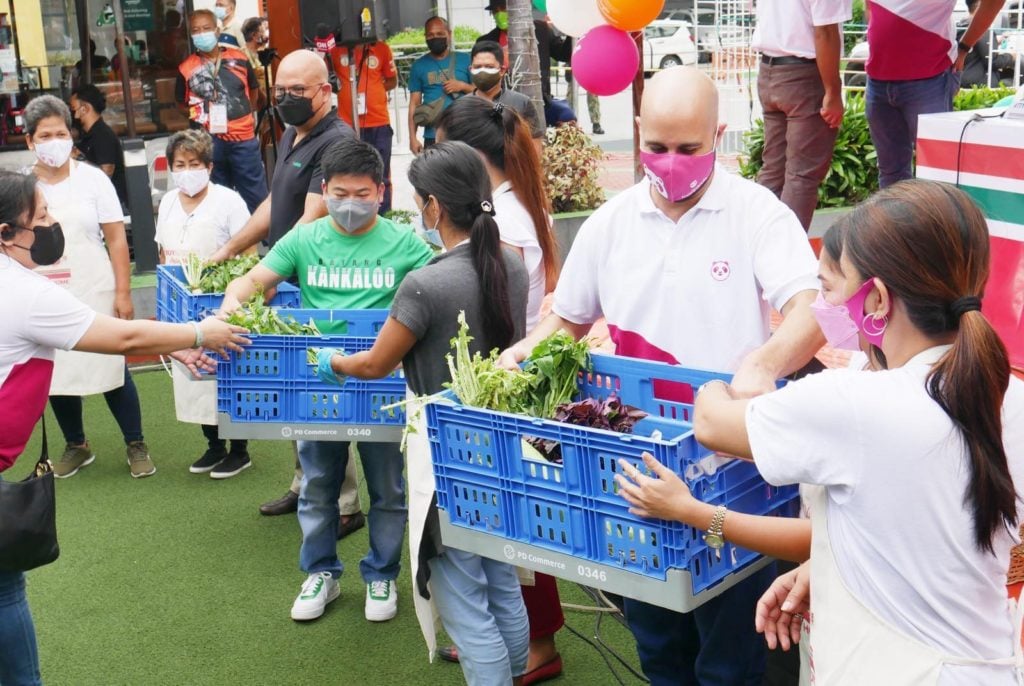 Foodpanda PH managing director Daniel Marogy (third from right) hands over fresh produce to a beneficiary of BuyAnihan Palengke, a livelihood program launched on Nov. 23 in Caloocan City which seeks to provide income opportunities to the needy. CONTRIBUTED PHOTO

A livelihood program called “BuyAnihan Palengke” which seeks to provide a source of income to those in need—workers who lost jobs during the pandemic and reformed drug dependents—was launched in Caloocan City last Nov. 23 in its pilot run.

BuyAnihan seeks to connect beneficiaries directly with sources of agricultural produce and consumers to provide income to those who are having difficulty making ends meet during the pandemic.

Beneficiaries would be tapped as resellers of fresh vegetables and fruits through BuyAnihan, which was conceptualized by officials behind foodpanda PH with the help of Philippine Seven Corp., operators of 24-hour 7-11 stores nationwide.

The two private companies teamed up with the Caloocan City government and diocese for the launch of BuyAnihan, which was conceived as a lifeline for the poorest not only in Caloocan but also in other Metro Manila Cities who are having difficulty finding or returning to their jobs.

Rep. Dale Malapitan and officials of the two companies—Daniel Marogy, managing director of foodpanda PH, and Victor Paterno, CEO of Philippine Seven—signed a memo of agreement (MOA) last Nov. 23 for the initial launch of BuyAnihan in Caloocan.

Beneficiaries of the program in Caloocan received their initial produce for reselling following the MOA signing.

Under the MOA, foodpanda PH will jumpstart BuyAnihan with seed capital while Philippine Seven will use its delivery network to bring goods directly to resellers from farms. The nongovernment organization Asian Society of Community Rehab Practicioners (ASCORP) will be the implementing arm in coordination with the Caloocan City government.

“I wish more companies would follow suit and align their CSR projects with the needs of our communities and marginalized sectors,” said Malapitan after the MOA signing.

Marogy said one of the objectives of BuyAnihan is to provide a source of income to its beneficiaries, including families of foodpanda riders, and those who lost their jobs during the pandemic like former OFWs, out of school youths, single parents and other beneficiaries.

“We want to build their confidence and lead them towards the path of financial independence,” Marogy said.

The program would be three-pronged, said Marogy—provide income to beneficiaries, decent profit margins for farmers and fresh produce for consumers.

Paterno said BuyAnihan intends to pave the way for reformed drug dependents and drug rehab graduates to be productive members of society.

“Our trucks travel all over the country and it would be an honor for our company to be able to use our logistics chain to help,” Paterno said.

ASCORP will coordinate with the city government to identify beneficiaries among former drug dependents.

One of the reformed drug dependents being given hope is Meredith Mendoza, 39.

She said she saw BuyAnihan Palengke as a chance to pay back the community that has opened doors for her. She started to use drugs in 1998 which landed her in jail for two weeks in Caloocan. After getting married, she and her husband moved to Nueva Ecija to grow and sell vegetables for seven years. But a series of tragedies, including the deaths of her husband and their first child, led Meredith to depression and ultimately back to using drugs.

Meredith went in and out of broken relationships, rearing children out of wedlock and getting arrested for drug use. A former live-in partner was killed by police while she was in jail, which made her see that drugs would harm not only her but her children, too.

Today, Meredith is completely drug-free and reports to the diocese regularly. She is one of several other drug rehab graduates who will join BuyAnihan Palengke as a community reseller.

Lacson-Sotto tandem nixes motorcades: How can you talk to people if you’re moving?