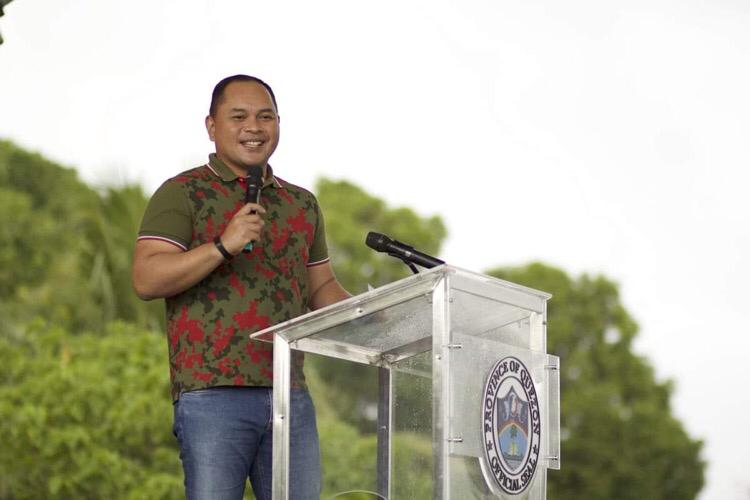 Quezon Province 2nd District Representative David “JayJay” Suarez on Friday, January 15, led the groundbreaking ceremony for the construction of Lucena City General Hospital (LCGH) in Brgy, Mayao Parada, in Lucena City, Quezon Province. The LCGH multi-purpose building is a PHP 40, 000, 000 priority project of Rep. David Suarez and Alona Partylist Rep. Anna Suarez to decongest the Quezon Medical Center, and to buff up the healthcare programs not just of District 2, but of the entire province of Quezon. When fully operational, the 150-bed capacity of LCGH will greatly decongest the Quezon Medical Center – the only government hospital in the province, which has a 200-bed capacity and admits an average of 42, 269 patients yearly.

“Ang kalusugan, parte po ‘yan ng maraming bagay sa ating buhay. Mahirap mag-aral kung may sakit, at hindi ikaw ang top choice for employment kung marami kang iniinda. Lalo na ngayong pandemya, our health is our first shield against a virus that has no massively available cure yet,” Rep. Suarez said. “Our program to expand and improve our existing healthcare system is proof of our commitment to responding to our province’s programs in deep and holistic ways possible,” he furthered.

Aside from the construction of a new hospital, Rep. Suarez’s programs include focus on First One Thousand Days of Life (Q1K), No Balance Billing, funding for Barangay Nutrition Scholars, among others. He also thanked the national government for being a strong partner for multiple initiatives not only in the second district, but of the entire province. “Ito hong programang pangkalusugan natin, matagal na ho nating panata at ginagawa sa probinsiya. Masaya tayo na kinikilala ng national government ang lahat ng plano natin. Iyong presensiya ni Sen. Kuya Bong Go, who’s also the chair of the Committee on Health sa Senado, ay maliwanag na patunay na suportado tayo ni Pangulong Duterte. We are partners for change and partners for health,” he ended.

The event was attended by Gov. Danilo Suarez, Vice-Gov. Samuel Nantes, and members of the provincial government, and Lucena City Mayor Roderick “Dondon” Alcala, Vice-Mayor Philip Castillo, and other members of the Local Government. Senator Christopher “Bong” Go also delivered a message as the event’s guest of honor.

Read Next
Filminera and Phil Gold Year-end treat caps P21.8 M assistance
EDITORS' PICK
Nestlé Philippines’ ‘NESCAFÉ Plan’ bags Grand Anvil at PRSP 56th Anvil Awards
Pope Francis to meet top cleric Sistani on second day in Iraq
Every Filipino home can now be a smart home with realme TechLife
Smart reinforces superiority with best speed and mobile video experience in PH
Don’t waste the hope of vaccines, warns WHO
822 NPA-free barangays set to get P20-M gov’t aid — Esperon
MOST READ
Robredo on Sara Duterte leading poll surveys: Why are Filipinos drawn to leadership of this kind?
So: I lacked connections to succeed in PH ‘culture’
US weapons, hardware in exchange for VFA
Gerald admits being with Julia, reveals breakup with Bea through ‘too many conversations’
Don't miss out on the latest news and information.

Don’t waste the hope of vaccines, warns WHO

Robredo on Sara Duterte leading poll surveys: Why are Filipinos drawn to leadership of this kind?

So: I lacked connections to succeed in PH ‘culture’

US weapons, hardware in exchange for VFA

Gerald admits being with Julia, reveals breakup with Bea through ‘too many conversations’