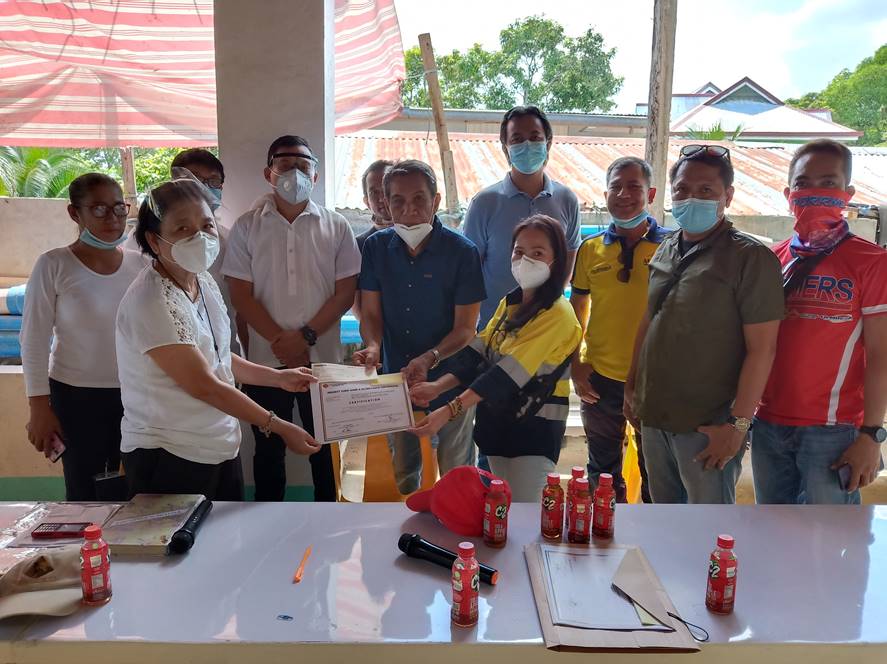 Filminera and PhilGold hand a facsimile of a check worth PhP5 million plus relief goods meant to help the quake-hit victims in Cataingan town in Masbate province.

Filminera Resources Corporation (Filminera) and Phil Gold Processing & Refining Corp. (PGPRC) turned over P5.29 million in cash, plus 100 sacks of rice and 50 folding beds to the Municipality of Cataingan, following an earthquake in Masbate.

Also, Filminera and PGPRC donated one million pesos worth of relief goods and building materials to adjoining Masbate municipalities, which communities and households were severely affected by the earthquake.

Cataingan was hardest-hit by the 6.6-magnitde quake that shook the entire Masbate province last August 18. The earthquake’s epicenter is seven kilometers off Cataingan. The Filminera mine site in Aroroy is 150 kilometers away from Cataingan.

As a post-earthquake response, a team from Filminera and PGPRC joined Cataingan Mayor Cabatana and the Municipal Engineer and the Municipal Administrator, to inspect and assess the damaged public structures in the municipality.

In a recent weekend inspection, environmental experts from the Mines and Geosciences Bureau (MGB) and the Department of Environment and Natural Resources (DENR) visited Filminera’s mine site in Aroroy, and reported in an exit conference  that there were no cases of damage to property or injury to people at the mine site. Community stakeholders, the local government units, and Filminera and PGPRC representatives attended the conference.

Filminera President Cris Acosta pointed out that inspection results simply confirmed the earlier findings of in-house technical experts and third-party international consultant GHD that there was no damage to structures and equipment.

GHD has been an advisor of the Masbate Gold Project since 2007. GHD was initially engaged to carry out the detailed design of the Tailings Storage Facility (TSF), and has been providing detailed design and construction supervision services for the TSF development. GHD also provides geotechnical assessments, deposition modelling, embankment design and analysis, mine site water balance modelling, and design of the water treatment plant.

The management of Filminera and PGPRC temporarily stopped mining in August 21 to give way to the inspection team, and has since resumed normal operations in August 27.

No entry for minors in Metro Manila malls — mayors

Pacquiao takes over as president of Duterte’s PDP-Laban

Military reports seizure of P4M in meth in Davao City

Cop gunned down in Cebu