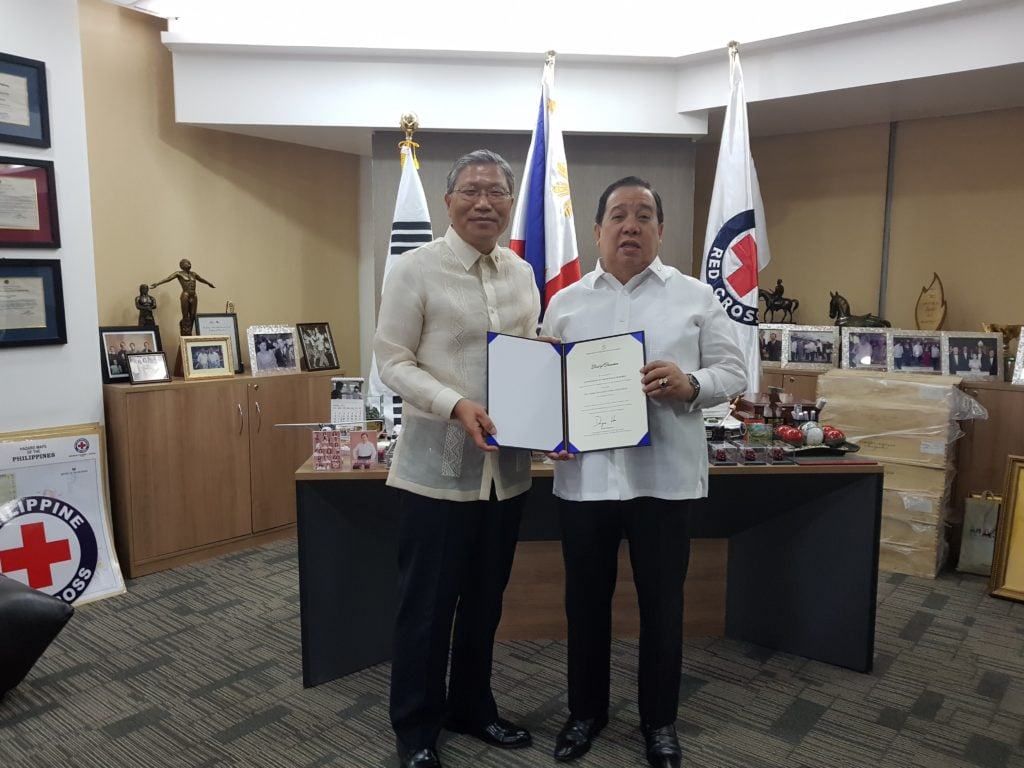 On behalf of the Republic of Korea, H.E. Ambassador HAN Dong-man on Thursday, September 20, handed over to Senator Richard Gordon, Chairman of the Philippine Red Cross (PRC), the amount of US$300,000 (around Php15 million) as humanitarian aid to assist in the emergency relief operations in communities affected by Typhoon Mangkhut (Ompong). The hand-over ceremony was made at the PRC Tower in Mandaluyong City.

Ambassador HAN extended to Chairman Gordon his deep sympathy to the Philippines and its people for the casualties and injuries caused by the typhoon and expressed the solidarity with the people of the Philippines.

Ambassador HAN said that the Republic of Korea appreciates the Philippines’ support during the Korean War, by sending more than 7,400 soldiers. He emphasized that Korea will never forget the noble and great sacrifice of the Filipino veterans. Ambassador HAN added that there is a Korean saying, “A friend in need is a friend indeed,” and that Seoul regards Manila as a close friend.

Ambassador HAN hopes that this contribution will help relieve the suffering of the affected Filipino communities and assist in their quickest possible recovery from this tragedy. Chairman Gordon expressed his appreciation for the support.

Inquirer calls for support for the victims of typhoon Ompong

Responding to appeals for help, the Philippine Daily Inquirer is extending its relief to victims of the recent typhoon Ompong.

Timeless Elegance in the Philippines’ Most Distinguished Home Kitchens

Best Gift Ideas in the Philippines

DOH: No encounter with family of Chinese man with novel virus in PH

Zubiri pushes for creation of Department of Disaster Resilience

Police probing case of rape of Russian tourist in Panglao

12 persons being watched by DOH in Central Visayas for coronavirus